Trans* Lounge is excited to present this 3-part summer mini-series that explores TGI/ENBY+ history that provides surveys of discourse on trans bodies, experiences, and psychology by different experts throughout the last few centuries.

These classes will explore trends in how the concept of a “trans-” or gender variant person, has been constructed, often without their input. Historical interpretations will be explored through lecture, opposing viewpoints and discussion. 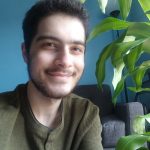 Arkaz Vardanyan (he/she) is a genderqueer employed in the Los Angeles Community College District, tutoring students on their writing assignments while studying History and Queer Studies at CSU Northridge. His passion for history intersects with his facilitation experience as he has organized and led workshops for college students. He collaborates on and oversees experimental changes in educational programming within his department. Arkaz strives to bring interactive learning strategies to classrooms and workshops and make diverse populations both aware of their histories and empower them with the tools to use that knowledge.

As a member of the Trans Lounge, Arkaz aspires not only to bring new experiences to others, but also to learn from the people he meets.

09/15 Share, Show and Tell – An INTERGENERATIONAL Space to Share the Magic of You. In Collaboration with the Center’s Senior Services.

09/29 Journal With Us – Finding Community Through Journaling